This blog and the three succeeding ones describe how academic resourcing models are revolutionizing decision-making by provosts, deans, department chairs, and program heads.  We will see that these models, together with better understanding of not-for-profit organizational principles, can help university leaders and faculty reshape their institutions through better resource management.
I shall begin with an all-too-familiar narrative: Sober faces lined the table as the Provost convened the Council of Deans. Before them lay the financial vice president’s report on the unsustainability of their schools’ current degree programs.  Tuition and fee revenues needed to be increased or teaching costs reduced so the University’s budget could be returned to financial equilibrium.  The possibilities for tuition rate and fund-raising increases had been exhausted.  Hence there was no choice but to look at the academic programs themselves.  But how to decide? The discussion ranged widely and sometimes acrimoniously.  Some deans and staff members suggested eliminating the smallest programs, on the grounds that they probably were money-losers.  Others insisted on protecting the programs judged to be most important academically – which, unsurprisingly, often were resident in the speaker’s own school.  Still others advocated programs with strong and growing presence in the marketplace.  Finally, the Provost had had enough.  All the ideas had merit, but there seemed to be no way to balance the factors.  Lacking a coherent set of principles and the data needed to exercise them, the meeting threatened to degenerate into an organizational power struggle. Resources in higher education steer colleges and universities both strategically and tactically.  They drive incentives and accountability for faculty and staff while providing academics with the infrastructure they need in order to perform effectively.  But while all colleges and universities can produce budgets, few have the evidence, knowhow, and cultural capacity to effectively balance academic mission, marketplace realities, and the requirements of financial sustainability.  Happily, today’s academic resourcing models enable academic leaders and faculty to close these gaps and do a significantly better job controlling costs and improving academic performance. There are three kinds of academic resourcing models:  internal economic, external economic, and mission-market-margin balance.  The internal economic models provide structural descriptions of the university’s activities, especially in the area of teaching.  They provide enough detail to address both strategic and operational questions, with a degree of richness that engages academic officers and faculty on issues they know to be important.  They also provide important financial information.  The external economic models deal with market performance and potential for individual programs.  They provide current and trending data about relevant student populations, inquiries about admissions, the job prospects for graduates, and the intensity of competition.  The balance model helps decision makers organize their thinking about the judgments and evidence needed to navigate the hard choices of budget-making.  As noted, this blog series will introduce readers to all three types. 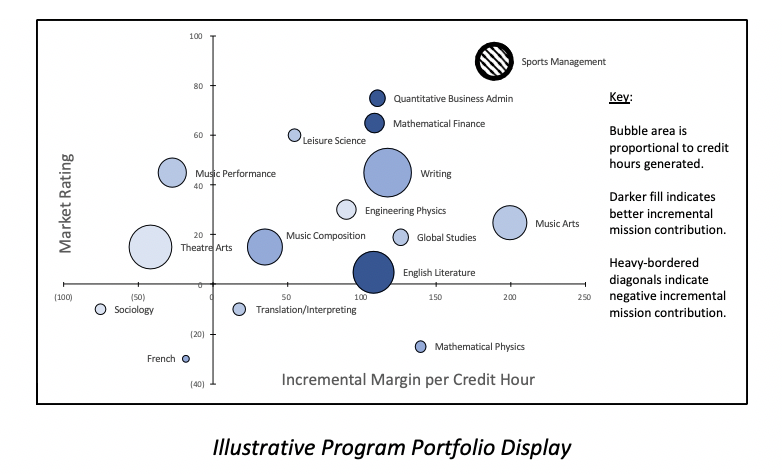 Figure 1 illustrates the information obtainable from these models in a display that is organized around a hypothetical institution’s fifteen degree programs.  The choices boil down to deciding which programs to expand and which to cut back or eliminate.  The variables are as follows: • Incremental Margin per Credit Hour (on the horizontal axis) comes from the institution’s internal economic model. • Market rating (on the vertical axis) comes from the external economic model. • Program size (bubble area) as measured by the credit hours it generates. • Incremental mission alignment (bubble fill) reflects decision-maker judgments about the relative merit of changes in program size. Consider the program in Sports Management, for example.  Its large bubble appears at the upper right-hand corner of the figure, which means it makes money, has healthy market presence, and is large enough to matter financially.  It seems like a good prospect for expansion…until we recognize that doing so would be antithetical to mission.  Sports Management may be a desirable program overall, but comparing its striped fill and heavy border with the figure’s key shows it is already larger than the university would like—i.e., that its incremental contribution is negative. In contrast, the writing program is large and profitable, shows marketplace strength, and is fairly well aligned with mission.  Expanding the small programs in Mathematical Finance and Quantitative Business Administration would be even more beneficial for mission, and shrinking Theater Arts would save money with only a modest mission-related penalty. Subsequent blogs will discuss how the data are obtained and utilized, but first a word about the dynamics of model usage. Modern academic resourcing models change the conversations among provosts, deans, professors, and financial staff that invariably arise in connection with strategic analysis and budget-making.  The models supplement academic judgment rather than replace it, the latter being impossible because key factors such as mission contribution and learning quality are inherently subjective.  Such conversation-changing makes a huge difference because it brings evidence-based deliberation to bear on a broad range of important university problems that previously had to be addressed with ad hoc reasoning, conventional wisdom, and organizational power games. Use of these models brings both internal and external economics into academic conversations.  This bridges what has been a serious gap in university decision-making, caused by the cultural divide between academics and financial staff.  Professors and academic administrators have tended to focus on mission, the quality of teaching and learning, and the roles and workloads of faculty rather than on economic matters like costs, revenues, margins, and markets.  Yet it is abundantly clear that the two domains are integrally connected.  And because financial staff cannot be expected to learn the details and nuances of academics, it falls on the latter to bring the economic data into their own decision-making.  The modern academic resourcing models discussed here makes this possible for the first time. William F Massy Author: Resource Management for Colleges and Universities
PrevPreviousGrayReports August: Student and Employer Demand Trends Results Through July
NextGrayReports September: Student and Employer Demand Trends Results Through AugustNext