In a market where job postings appeared to be declining across the board, nursing fields once stood out as an exception to the rule. Overall, job postings in the U.S. dropped 33% between February and April while nursing job postings fell only 7%. In May, there was an abrupt change: the decline in the overall job market slowed to 4% but nursing fell 18%. 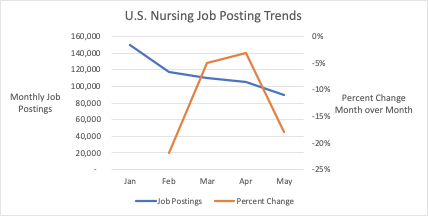 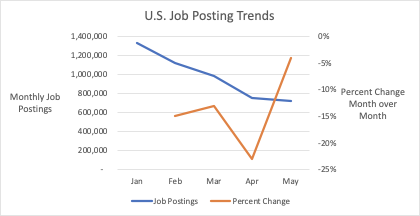 At first, COVID-19 accentuated the long-term shortage of nurses in the U.S., helping sustain the demand for nurses while the rest of the economy began its rapid descent. As the initial effect of COVID-19 passed, hospitals found themselves short of funds, particularly income from elective procedures. As a result, as mentioned in a BBC article from April, hospitals are now being forced to fire existing nurses and take down job postings for new hires.

The situation varies widely by state. For example, New York job postings declined by 39% in May while Ohio postings increased by 15%. Unfortunately, Ohio is one of only five states that posted increases in the nursing sector.

While an 18% decrease in job postings may not seem very important in comparison to the more than 50% decrease that other occupations have experienced, the nursing sector accounts for over 768,000 job postings since November 2019. A market this large has a correspondingly large student population. This means that a huge number of graduates who would normally be going into nursing fields will find themselves jobless. Of course, a sector this large is also an important force in the economy and may be a harbinger of declines in the overall healthcare industry. In our view, if the nursing decline continues to accelerate it could slow the overall economic recovery in the U.S.