The Hydrogen Economy and Employment in the Energy Sector

A coalition of major oil & gas, power, automotive, fuel cell, and hydrogen companies recently released a “Road Map to a U.S. Hydrogen Economy” that predicts hydrogen from low-carbon sources could provide approximately 14% of the country’s energy needs by 2050. The key phrase here? “Low-carbon.” Currently, 95% of the hydrogen we use is developed using fossil fuels such as coal or natural gas. However, hydrogen itself, when used in a fuel cell, for example, emits exactly zero CO2. Hence the global race to create a carbon neutral Hydrogen Economy.

At present, the process of creating green hydrogen through renewable energy sources and electrolysis is both too expensive and technologically limited to achieve in a scalable way. But energy companies and fuel cell manufacturers are striving to improve that process and simultaneously create the infrastructure that will be necessary to store, transport, and deliver hydrogen to customers. Higher education institutions are also actively involved in research and development of new technologies and applications to advance the hydrogen economy.

Current jobs related to the hydrogen economy generally require advanced education and expertise in fields such as chemistry and engineering. Supply chain and logistics experts are involved as well. Gray’s data show that job postings related to chemistry, engineering, and supply chain and logistics are consistently high, looking at the year-over-year comparison, with a considerable increase to 68,000 in October.

Job Postings related to Engineering and Supply Chain by Month 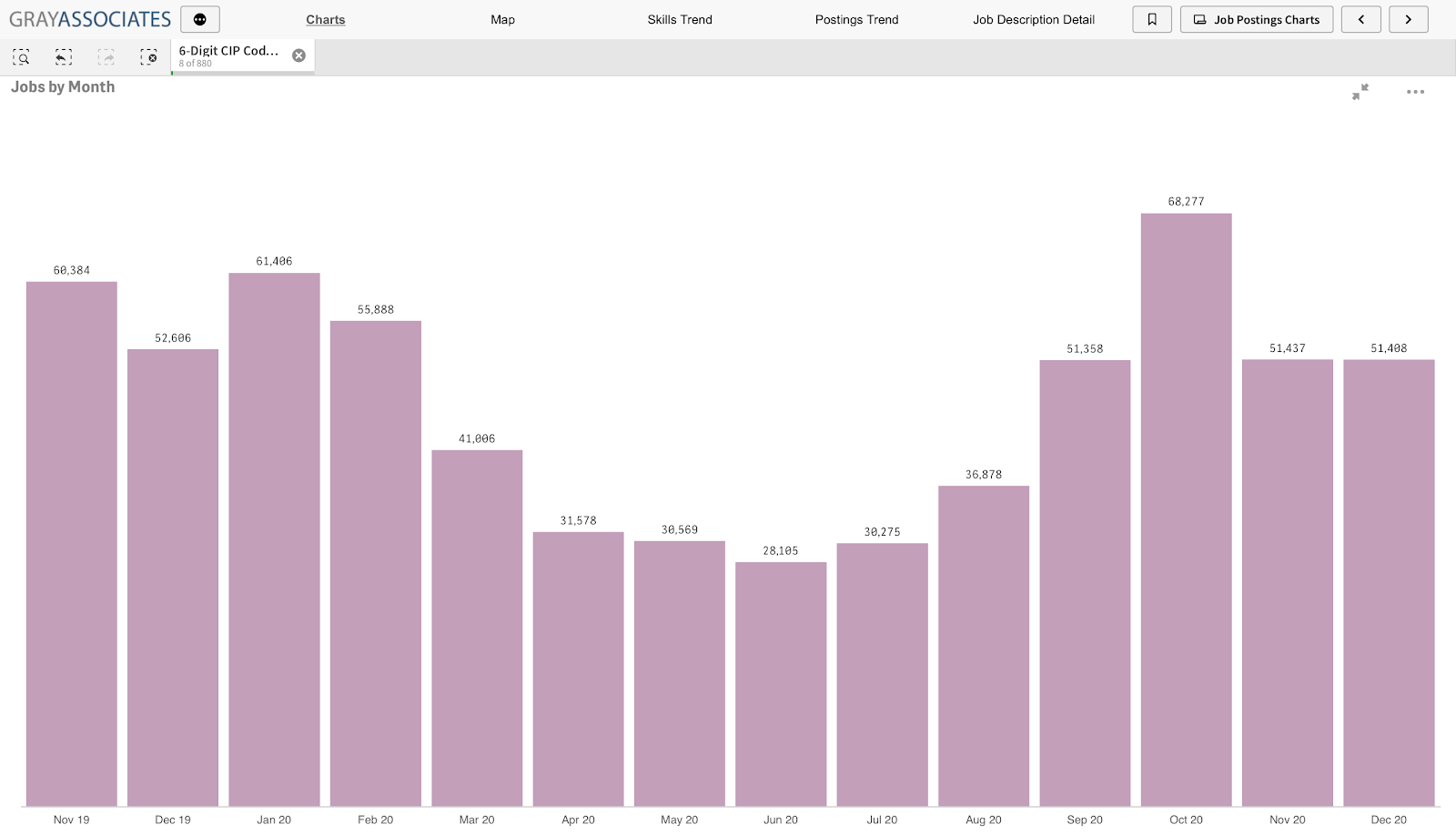 A fully realized hydrogen economy has the potential to support hundreds of thousands of additional jobs – as many as 700,000 by 2030 according to the Road Map report. These jobs will span a wide range of occupations and require varied skill sets and education levels. Predictions include everything from hydrogen truck drivers and plant operators to asset managers and power marketers. To meet this demand, schools may need to develop new concentrations and programs not just in disciplines like chemistry and engineering, but also in fields such as energy management, public administration, business and marketing, communications, and even trades such as welding and manufacturing technicians.

The efforts to combat climate change by reducing the amount of CO2 in the atmosphere make hydrogen a promising candidate for clean energy. Colleges and universities can play an important role in providing the education, expertise, and skills required to support the development of a fully realized hydrogen economy, and train workers for the myriad occupations such an economy would produce.

PrevPreviousStudent Demand:   The Critical Metric for Program Investment Decisions
NextHigher Education:  Are You Ready for the Economic Boom?Next