Tonight, the finals of the NCAA tournament were supposed to take place – the culmination of three weeks of March Madness. Most likely, the championship game would have featured two powerhouse schools like Duke and Kansas; most of the time, it does. But this tournament has never been defined by the championship game or the big-name schools. This tournament has always been about buzzer-beaters and Cinderella stories. Fans love to watch an upset, like the

13th seed upsetting the 4th seed or the 90th seeded school that sneaks into the sweet sixteen or the elite eight. This tournament has always been a chance for a small school to make a name for itself. Think how big a brand Gonzaga is now thanks to being in the tournament for 10 years in a row. Without the chance to be part of the March Madness showcase, these schools will lose more than just a game or a tournament; they will lose the chance to build a brand, which leads to increased enrollment and more revenue. The impact of a No-Madness March will be felt for years.

In his article titled The NCAA Canceled Its Cash Cow. Now, How Bad Could This Get? @BrianBurnsed states, “March Madness is also routinely a boon for smaller schools that earn berths. Not only do universities receive funds for making the tournament, but a deep run for the likes of Florida Gulf Coast, Butler or Loyola Chicago can have a lasting impact on enrollment and donations.” Now, you can totally understand how a deep run in the tournament could fire up alumni, leading to inflows of cash donations and more branded apparel hitting the streets. This is fairly easy to track. What is much harder to track is how success in the tournament can drive an increase in interest in the school. At Gray, we track brand searches every month on our Demands Trend Webinar. We see a considerable and significant spike in searches for winning schools or for schools playing in buzzer-beater games.

Let’s take a look at some data. Here is a table on search volume from January 2019: 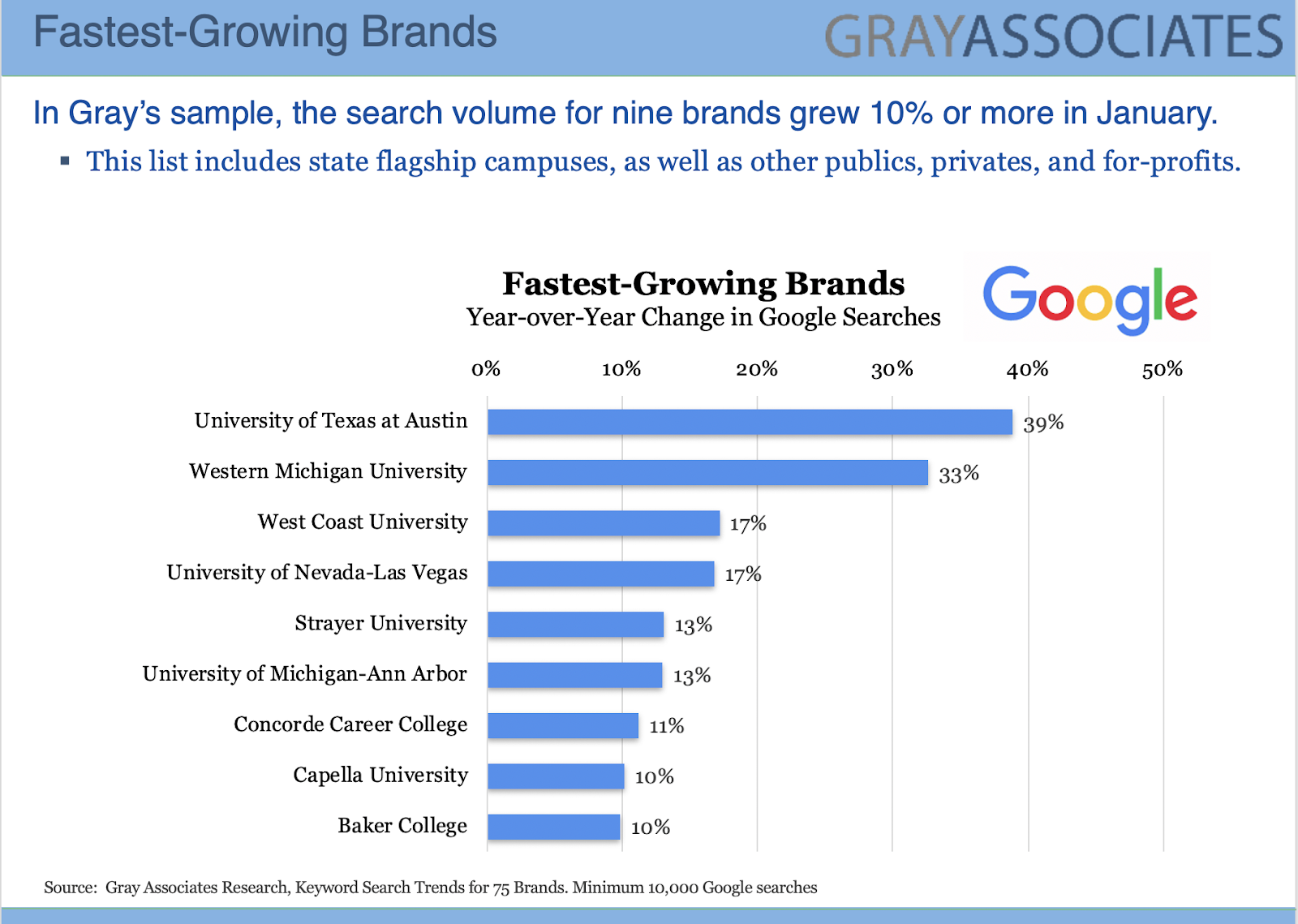 We found nine brands grew by 10% or more. While the impact of the growth is not known, it could be due to a number of factors: a news article about the school, a launched marketing campaign, etc.

By contrast, now let’s look at the results from March 2019, coinciding with the tournament:

It’s hard to deny a link between the tournament and the growth of search volume for some of the smaller participating schools. The tournament has an exciting ability to draw attention to smaller, lesser-known colleges and universities.

In last year’s tournament, Wofford came out of nowhere to make it to the second round and searches clearly exploded. Schools don’t even have to win a game in the tournament to see an increase in search volume and brand awareness as seen with both Belmont and Saint Mary’s. Both of these teams lost in very competitive games to higher-seeded schools in the 1st round, yet searches still jumped. What’s most interesting is we see more than just a one month spike. Because the tournament lasts so long and tournament recaps and highlights are replayed, growth tends to continue into April.

Searches for both Wofford and Belmont to boom throughout April 2019. 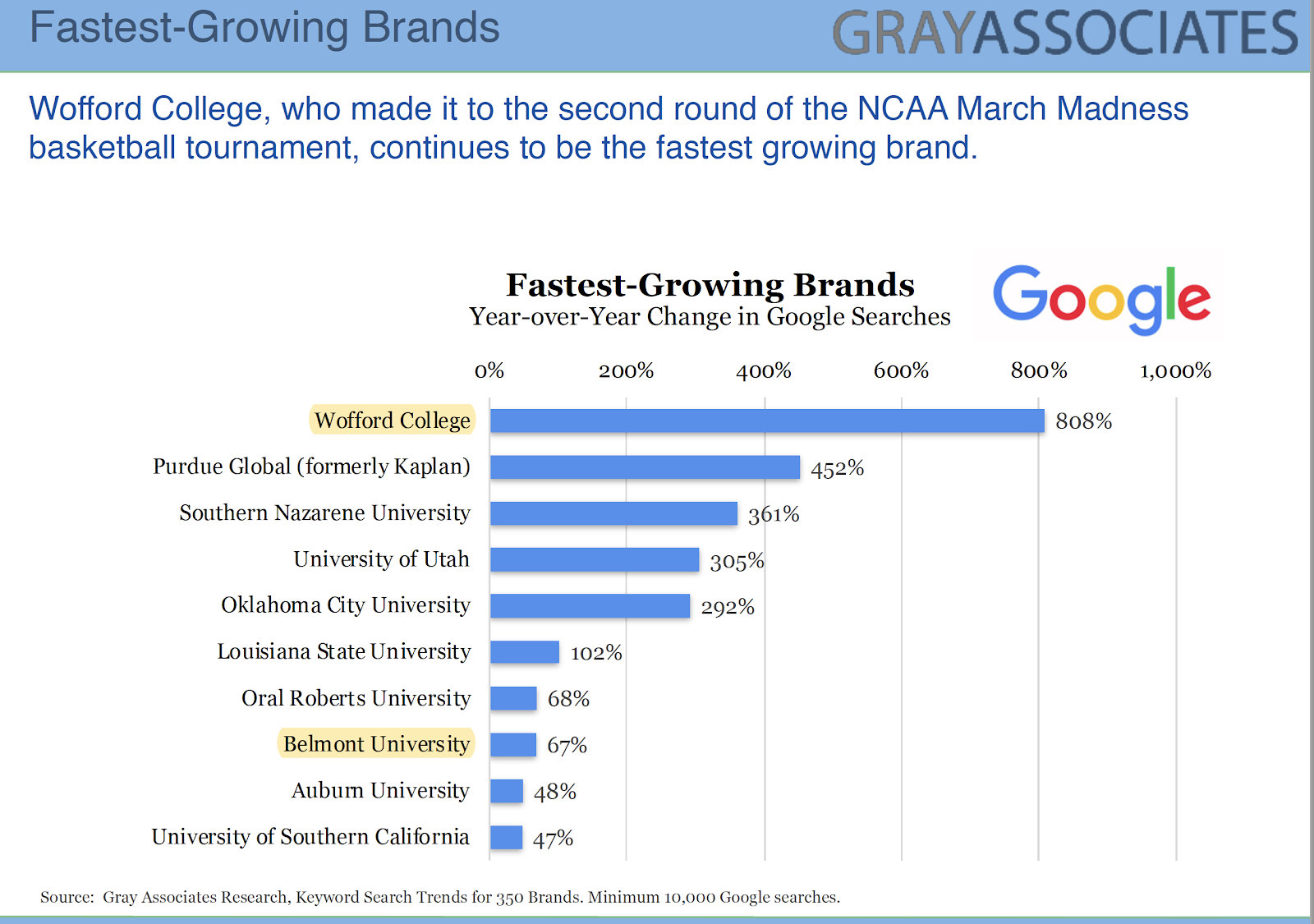 As you can see, there seems to be a strong correlation between participation in the NCAA basketball tournament and increased brand awareness, especially for smaller colleges and universities. The TV, radio, and online publicity from March Madness leads potential students to start considering schools they might never have otherwise because they see it as an opportunity to be part of a winning story. Perhaps even a Cinderella run through the tournament and a heck of a lot of school pride to accompany it. This increased awareness can then lead to new enrollments and an increase in revenue. For schools like Wofford and Belmont, March Madness provides a chance to shine, even without the large marketing budgets. The tournament helps them to establish a brand.

No-Madness will affect colleges large and small but smaller universities that would have made the tournament will suffer the most. Without deep pockets for marketing, these schools cannot recoup the bump the tournament would have provided. This year, there will be no ball for Cinderella and no chance for a happily ever after.

Join us for our Webinar on April 23 at 2:00 pm ET as we look at our current data on trends in student demand and employer requirements.